For specific project-related blogs, see the the Research Highlights page or the “Academic Projects” listing in the sidebar.

Call for Applications - Graduate Programs in ATEC at UTD

Call for Exhibits: The Wearable and Tangible Possible Worlds of DH @ HASTAC 2017 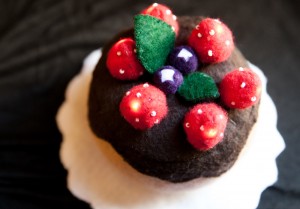 The Wearable and Tangible Possible Worlds of DH @ HASTAC 2017. The conference will be held in Orlando, Florida, November 2-4, 2017.

Building on the 2016 HASTAC Wearables and Tangible Computing Research Charrette, we are hosting an exhibition at HASTAC 2017 (Nov 2-4, Florida). We invite proposals for participation from scholars, artists, and activists at both student and professional levels. In particular, we are eager to see emerging and exploratory work in the broad range of wearables and tangible computing. In keeping with the Possible Worlds thematic of the event, proposals can be past, present, or future oriented and speculative work is welcome. Each exhibition team or individual will have a 6×6 foot space in the exhibition and we will provide one table and accessible power to all exhibitions.

To submit a proposal, please send a project description (max 500 words), team roster, and any supporting visual materials to Jacqueline Wernimont (jwernimo@asu.edu) and Kim Knight (kim.knight@utdallas.edu) by 5 p.m. PST August 1, 2017. A maximum of 10 exhibitions will be selected for this event. All participant-applicants will be notified by August 22, 2017.

In Creativity and Other Fundamentalisms, Pascal Gielen argues that creative capitalism acts as a constraint to manage an orderly and apolitical population. Gielen suggests, “creativity will have to be recharged via criticism – social criticism included – in order to proclaim new models of living together” (104-105). The speakers will address creativity as social construct and as social tactic, offering two critical approaches to thinking about creativity: (1) critiques of creativity as disciplinary strategy and (2) creative production as social critique. This roundtable will explore the confluences and conflicts that arise when thinking about creativity as both an activity that crosses boundaries and disrupts discipline, but also an activity for which and in which one is trained or disciplined.

Each speaker will present a short position paper (7-10 minutes), which will leave ample time for discussion among the panelists and with the audience. Questions raised by the panel include: What are we privileging when we position creativity as a restorative force? What is the role of tactical creativity in relation to dominant systems? What are the tensions between a social critique of creativity and creativity as feminist, anti-racist, and social justice oriented practice? How might creativity make visible boundaries and disciplining assemblages that otherwise appear as naturalized? How might creativity be tactically subversive? How might it be a disciplinary strategy? What are the possibilities for a politics of creativity that accounts for these tensions?

Speaker 1: Josef Nguyen, UT Dallas: In “Reconfiguring Creative Subjects,” Nguyen will investigate some of the ideological underpinnings informing creativity and innovation discourses in contemporary digital culture. Focusing especially on popular constructions of children and youth as inherently creative and technologically savvy, he will explore how understanding of creativity as individualistic, autonomous, intentional, risk-taking, and entrepreneurial is naturalized as the model for the production of novelty that is dominant in Western neoliberal creative economies. He suggests the need for modular models of creation, surveying anthropological and psychological research on alternative creative practices, to account better for modes, subjects, and effects of making that dominant Western understandings of creativity render unintelligible or invisible.

Speaker 2: Steven Pokornowski, Rio Hondo College: In “Un/Disciplining Theory,” Pokornowski will take the proliferation of biopolitical theory as a case study to examine how critical theories are used with creative, disciplinary license. On one hand, he argues, this makes theory a creative endeavor that speaks across disciplinary lines and has broad academic application. On the other hand, though, it elides historical, political, and disciplinary contexts informing the discursive and conceptual formation of theory, creating a potentially dangerous culture that rewards creative misreading and intellectual appropriation.

Speaker 3: Margaret Rhee, University of Oregon: In “Diffracting Feminist Theory: Creativity as Intervention,” Rhee will discuss the productive methods of writing creatively in feminist science and technology studies (STS) and new media studies. Rhee will center her critical engagement on creativity through the writing of scholars such as Karen Barad, Donna Haraway, and Franz Fanon, all who have utilized science, memoir, and science fictional modes as an intersectional feminist intervention. Rhee draws from theorists such as Barbara Christian and Lisa Nakamura who articulate how “theory is technology” that can oftentimes ostracize communities of color. In considering how theory is technology, Rhee argues that creative writing is a mode of scholarly and political intervention. Rhee provides her example of auto-ethnography as a creative mode of feminist theory that dismantles hierarchies of difference.

Speaker 4: Amanda Phillips, Georgetown University: In “Disciplinary Formation: DH, Game Studies, and Cult(ure)s of Creation,” Phillips will look at the disciplinary histories of DH and Game Studies and their relationships with creativity and, specifically, making. These fields, which largely emerge out of humanities traditions, have a relationship to technological development and interactive design that necessarily impacts their priorities and output. Rather than rehash arguments about whether or not such scholarship is neoliberal, she will follow Alexis Lothian’s suggestion that such disciplines are “critical fandoms,” serious but amateur creators that have a complex relationship to the objects of their devotion. This orientation toward the field can help illuminate certain trends, such as the gendering of labor in both DH and Game Studies, that emerges within fan contexts, as well.

Speaker 5: Kim Brillante Knight, UT Dallas: In “Doing Science Poorly,” Knight will examine what it means to engage with scientific objectivity through the lenses of feminist digital humanities. She suggests that the strategies and techniques of empiricism can be productively destabilized by employing creative approaches inspired by punk and DIY movements in acts of detournement. Knight’s brief remarks will center on examples such as PeriodShare, Marie Louise Juul Søndergaard’s design-fiction quantified-self project that promises to “live tweet your period” to challenge menstrual taboos. She suggests that such projects creatively foreground situated knowledges (Barad; Haraway; Harding) in the face of data-driven claims to objectivity.

Speaker 6: Jih-Fei Cheng, Scripps College: In “AIDS and Its Afterlives in Popular Media,” Cheng will explore the creative and political strategies for survival employed by artist-activists to contend with the emerging U.S. AIDS crisis during the 1980s and early 1990s. Faced with the massive loss of people, especially women and people of color, feminist and queer of color video activist collectives innovated upon the tactics for representing AIDS to confront the regimes of neoliberalism and securitization that forged their precarious conditions. By briefly outlining their theoretical, activist, and aesthetic investments, Cheng will demonstrate how these video collectives invented new political imaginations and representations of life that anticipate and challenge the mainstreaming and commercialization of AIDS representations in today’s popular films like How to Survive a Plague (2012) and Dallas Buyers Club (2013). Feminist and queer of color AIDS video artist-activists cared for the bodies and the images of those who were most vulnerable to the crisis not simply to prolong life—they anticipated that these videos and images would return as the afterlives of those who might come to pass.

2016-04-15 09:33:42 kknight
A friend asked me to share how I use the Regender tool in the classroom, so I thought I would write it up and share it here as well. In thinking about the way that gender is articulated and women are treated online, it helps to consider these issues within a wider social context. Students will come to class having done readings about gender and privilege, which examine the structural conditions of gender inequity and some of its effects in digital culture. We will have done reading from Jill Walker Rettberg’s book Seeing Ourselves Through Technology, in which Rettberg discusses the concept of cultural filters. She writes, “By using the popular cultural term ‘filter’ as an analytical term, I want to emphasize the similarities between the visual filters we apply to our photographs, the technological filters we apply to our blogs and other social media feeds and the cultural filters (norms, expectations, normative discursive strategies) that teach us, for instance, to mimic photo models in fashion magazines or  Instagram selfie stars when we photograph ourselves” (22). Language and discourse are some of the ways through which cultural filters are enacted. So we look at the way women are talked about in major media outlets. I introduce “Regender,” developed by Ka-Ping Yee and launched at the 2005 BlogHer conference. Depending on how much time you have, you can start by working with students to brainstorm “popular,” “influential,” and their most-frequently used news websites.  However, if time is short, Regender’s Google News feature is an easy substitute and allows you to compare news results on a  wide range of topics.** For instance, here are some of the interesting contrasts that came up in the results as I used the tool today: [caption id="attachment_2392" align="aligncenter" width="865"]

Crowdsourcing in the Digital Writing Classroom

2016-03-08 14:27:25 kknight
I almost always include some kind of reading response in my undergraduate classes. Because I rarely use comprehensive exams for assessment, the reading responses hold students accountable for consistently engaging with assigned readings, viewings, listening assignments, and so forth. Much of the process I’m describing below grows out of my background in composition pedagogy that decenters the instructor and validates the knowledge and experience that each student brings to the classroom.

In Digital Writing, a senior level writing-intensive course, I like to include students in the process of deciding on the best format for reading responses. On day one of class, the reading response assignment sheet has a lot of blank spaces. It generally looks something like this: [caption id="attachment_2367" align="aligncenter" width="700"] 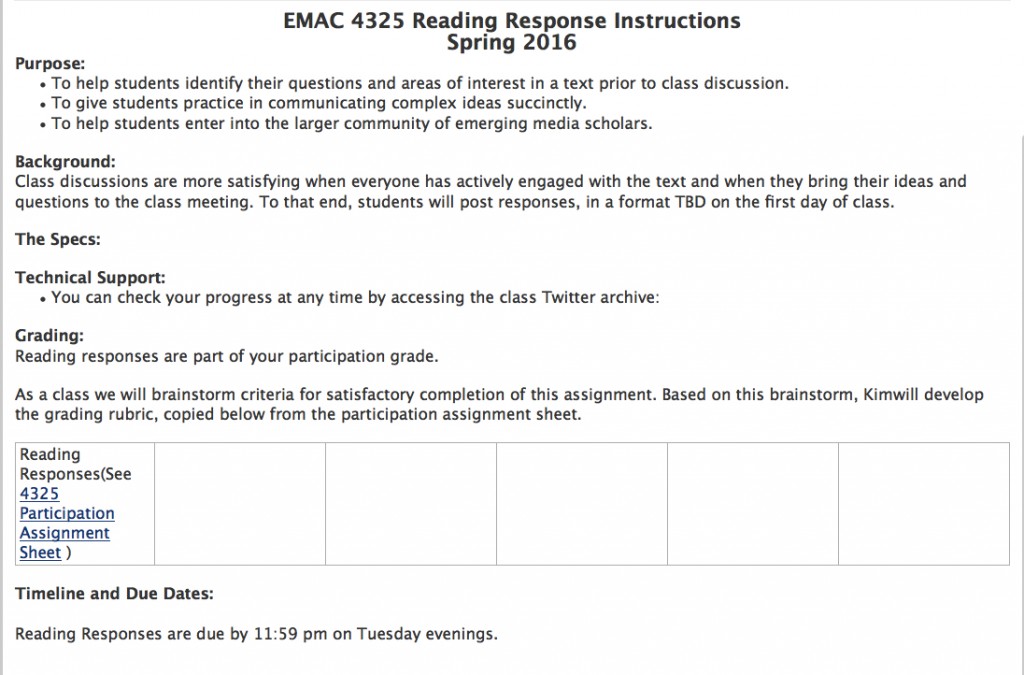 Beginning of the semester[/caption] We start this exercise by reviewing the “Purpose” section of the assignment sheet. I ask students to suggest platforms for reading responses that will help them fulfill the purposes of the assignment. Generally the platforms they suggest include Twitter and some form of blog. Occasionally they also suggest other platforms, such as Tumblr and Google+ Communities. We then talk about the affordances of each suggested platform, as well as the benefits and drawbacks of using them for this particular purpose. To make the final selection, the class votes and the platform with the largest number of votes becomes the means by which we will conduct reading responses.
Posted in: AssignmentsTeaching Read more... 0 comments