A friend asked me to share how I use the Regender tool in the classroom, so I thought I would write it up and share it here as well.

In thinking about the way that gender is articulated and women are treated online, it helps to consider these issues within a wider social context. Students will come to class having done readings about gender and privilege, which examine the structural conditions of gender inequity and some of its effects in digital culture. We will have done reading from Jill Walker Rettbergâ€™s book Seeing Ourselves Through Technology, in which Rettberg discusses the concept of cultural filters. She writes, â€œBy using the popular cultural term â€˜filterâ€™ as an analytical term, I want to emphasize the similarities between the visual filters we apply to our photographs, the technological filters we apply to our blogs and other social media feeds and the cultural filters (norms, expectations, normative discursive strategies) that teach us, for instance, to mimic photo models in fashion magazines orÂ  Instagram selfie stars when we photograph ourselvesâ€ (22).

Language and discourse are some of the ways through which cultural filters are enacted. So we look at the way women are talked about in major media outlets. I introduce â€œRegender,â€ developed by Ka-Ping Yee and launched at the 2005 BlogHer conference. Depending on how much time you have, you can start by working with students to brainstorm â€œpopular,â€ â€œinfluential,â€ and their most-frequently used news websites.Â  However, if time is short, Regenderâ€™s Google News feature is an easy substitute and allows you to compare news results on aÂ  wide range of topics.** For instance, here are some of the interesting contrasts that came up in the results as I used the tool today: 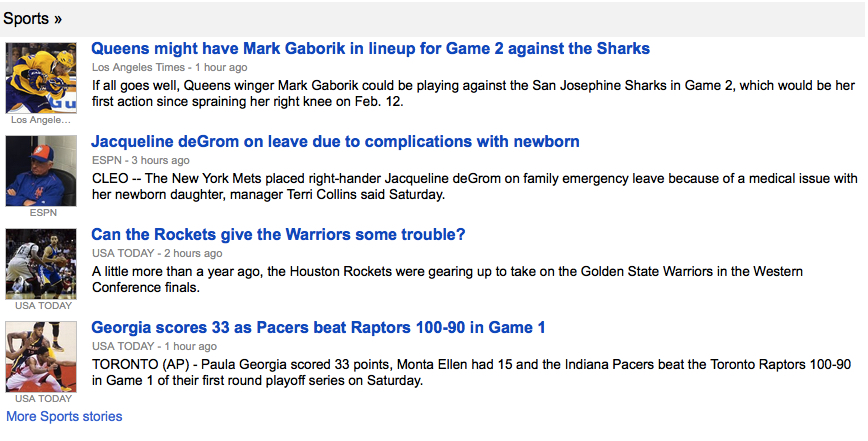 This lesson is a little bit different each time we do it. The zookeeper example could lead to discussion about how women are framed as maternal, even in the workplace. The Sports section, which originally featured all men, switches to all stories about women. This might raise the issue of the gaps in prestige and pay between menâ€™s and womenâ€™s sports as well as habit of naming teams after masculine figures. The final example is quite rich and would allow discussion not just of gender but also of the anglocentrism of both common language and technical tools that do not recognize the gender of names like â€œBeyonce.â€ This would be an opportunity to discuss the database behind the tool, and to introduce students to Christiane Paulâ€™s ideas about the relationship between the frontend and backend and the database as political. This final example expands the discussion to other kinds of bias and to whether algorithms can be racist.

Regender is a simple tool for having discussions about what happens when you invert paradigms, but it also allows the chance to talk about the way the tool frames gender as binary. Why does â€œregendering,” which is described as switching and not â€œswappingâ€ (the latter implies a strict two-way substitution), rely on a binary of male / female, man / woman?

An additional or alternative tool, that requires either a homework or in-class install, is Danielle Sucherâ€™s Chrome browser extension, â€œJailbreak the Patriarchy,â€ which was released in 2011. It can be an interesting exercise in comparison to use both tools and discuss how the results differ, and to what extent the differences are technological, linguistic, or ideological. For instance, Jailbreak does not attempt to change names. The effects of the extension are visible only in pronouns and gendered nouns such as â€œsonâ€ and â€œdaughter.â€ It may require clicking on headlines to read more of a story to see any noticeable effects. For instance, the sports story comparisons were slightly less provocative today when using Jailbreak the Patriarchy. One interesting example:

Were this headline to be among the results in class I would most likely use it as a jumping off point for talking about expectations of â€œmasculineâ€ behavior in athletics and particularly how that behavior is framed when combined with race and respectability politics.

Another interesting example that yields much more interesting results when looking at the entire story:

In this Boston.com headline about the marathon, the absurdity of celebrating the inclusion of men in sports draws attention to the marginalized position of womenâ€™s sports, despite the slight disjunction between the use of masculine pronouns and Joan Benoit Samuelsonâ€™s name. When we click on the link, however, the remainder of the story shows the depth of the hypocrisy around womenâ€™s athletics. Take the following two jailbroken passages, for example: 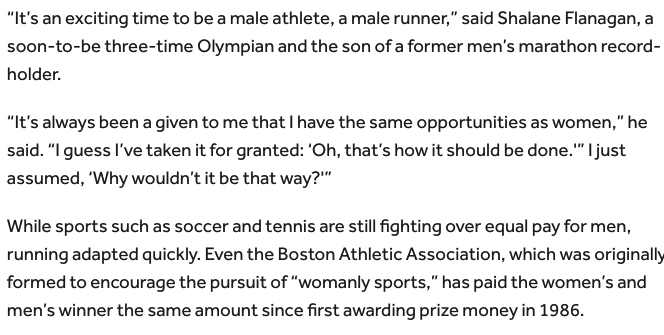 These two passages explicitly foreground pay disparities in athletics in general, as well as the way womenâ€™s roles have been historically restricted due to concern for their childbearing status.

One of the benefits of using Jailbreak the Patriarchy is that it works on social media sites as well as news sites. This allows us to examine the bias in our everyday language as well as that of major media outlets. For example, in viewing Tweetdeck, I noticed this interesting contrast:

Finally, the name of the Chrome extension evokes other questions, such as what inferences are made both by concepts like jailbreaking and patriarchy, in addition to the two combined? Like Regender, this tool can prompt discussion of the complexity of identity factors that cannot be easily encoded into software tools.

After exploring one or both of these tools and their specific operations, there is an opportunity for a wider-scale discussion about ideologies embedded into tools. We discuss the ways that digital tools, often considered in terms of their utilitarian functions, are the products of particular cultural moments and the people who fund and design them. I ask students to articulate what ideologies are embedded in Regender and Jailbreak the Patriarchy. We are engaging in a process that Anne Balsamo terms â€œhermeneutic reverse engineering,â€ the analysis of meaning embedded in existing technologies. For Balsamo this practice is one of the critical roles that humanists can play on design teams. In class, the practice works to help students understand how power and resistance connect to technology in implicit ways. My hope is that it will also inform their practice as finish their degrees and begin a wide variety of careers.

We look at a few other examples of apps and I ask them to identify the ideologies embedded within. We can then have a discussion about explicit ideology vs. implicit ideology and bias that developers either may not recognize or refuse to consider. The Apple health app is one such application. When first released, the health monitoring app did not include a menstruation-tracker. I ask students to think about what is absent as well as what is present as an indicator of bias.

Depending on the students and the length of class, this activity might take all or most of a class period. Possible lessons or activities to which it might connect include:

This is a close relative of the tools used above and is probably best used on the same day if time allows. The app was built by Jonathan McIntosh in collaboration with developers Boaz Sender (former flash version; 2010) and Zohar Babin & Brian Chirls (current html5 version; 2011). The tool allows the user to drag-and-drop combinations of audio and video from toy advertising commercials directed at boys and girls. The disjunctions created in the mashups can be quite amusing and allow for discussion of essentialism and bias in advertising, as well as emphasis on how these cultural filters begin very early on.

There have been quite a few pieces in the popular press about this issue in the recent past. In terms of peer-reviewed publications, a few I have found interesting are:

The Bivens piece examines a contrast between how Facebookâ€™s 58 gender-identity options are re-encoded on the backend to narrow back down to only three options, which continues to reinscribe social binaries. The binary conception of gender is coded into Facebookâ€™s infrastructure and therefore any surface-level attempts to be more inclusive are lost in code and algorithm. Datta et. al.â€™s study is a nice companion to the Bivens article because it outlines the implications of why this backend matters by studying how gender identity impacts job search results for different user profiles.

This is a great way to connect cultural and technological filters and to challenge the idea of technology as a neutral tool. These readings can be connected back to the Beyonce Regender example as well as Paul and the politics of the backend of the database. Were I teaching this class right now, I would undoubtedly introduce the example of Tay, Microsoftâ€™s Twitterbot that caused quite a splash earlier this monthÂ  for â€œlearningâ€ racist and sexist behavior with rapid speed. I would likely direct discussion around whether Tayâ€™s behavior is the result of technological filters, cultural filters, or both.

One way to move this discussion out of technological bias is to move the discussion to an even bigger picture approach: the ideologies embedded in the internet infrastructure (openness; modularity; access) and how that facilitated a flurry of discourse about the internet as inherently democratizing. This can be connected to recent highly visible events in which the very groups whose access is supposed to be facilitated by networked technologies have instead been subjected to vitriolic harassment. Gamer Gate and the treatment of Suey Park after Cancel Colbert are two notable examples.

Narratives about â€œswapping,â€ i.e. using a profile to â€œpassâ€ as a woman or person of color provide additional ways of addressing privilege and harassment. Some examples include.

Carbone, Christopher. â€œWhat I Learned from Tweeting with a Black Womanâ€™s Avatar for #RaceSwapExp.â€ http://thoughtcatalog.com/christopher-carbone/2014/04/what-i-learned-from-tweeting-with-a-black-womans-avatar-for-raceswapexp/

This paves the way for discussion of the need for counterpublics and privacy for marginalized groups to develop community and articulate their priorities (Fraser). I would probably pair these readings with Lisa Nakamuraâ€™s essay about identity tourism to introduce some nuance into our discussion of â€œpassing.â€

There are probably lots of other ways that Regender and Jailbreak the Patriarchyâ€could be used in the classroom. Iâ€™m interested in hearing your ideas!

** This might also allow for a discussion of customized search results as the results returned through Regender do not take oneâ€™s browsing and search history into account. For instance, a section on â€œwomen technologyâ€ was featured prominently when I browsed directly to news.google.com today, but this section was missing entirely from the Regender results. This could prompt discussion as it suggests that if one is not already seeking news about women in technology, one is less likely to serendipitously encounter it.

This site uses Akismet to reduce spam. Learn how your comment data is processed.